by Katerina Janik
A wedding is leaving the church as two boys are walking past. “Hey,” nudges one, “shall we give them a scare?”

“Oh yeah!” enthusiastically agrees the other and starts running to the groom: “Daddy!!!! What are you doing?!”

Google: I can find anything you want.

Wikipedia: I know everything.

Internet: You’re so funny. None of that would work without me.

Electricity: Leeeet’s not get hasty, shall we? Wife: Darling, it was such a hard day. Can you tell me the three magical words that always make me so happy?
-
Husband: You are right.
-
Wife: Very funny, no, the other ones.
-
Husband: I was wrong. (You): Do you wipe your butt with your right or your left hand?
-
(Victim): With my right hand.
-
(You): That’s disgusting. I use toilet paper.


Guest to a waiter: “I’m actually quite sorry we haven’t discovered your restaurant earlier.”
-
Waiter: “Oh, that’s nice. So you liked it here?”
-
Guest: “No. But earlier, that meat might have still been OK.” A tourist is enjoying the sights from the famous Tashkent tower in Uzbekistan when suddenly a guy in a hang-glider arrives, smashes into the tower and tumbles down to certain death.

Shortly afterwards, a second hang-glider does exactly the same.

The horrified tourist turns to the local guide, asking what on Earth just happened.

The guide shrugs, “You know how it is. Poor country, poor terrorists.” A daughter asks her mother, “Mom, was I really brought to you by the stork?”
-
“Yes, of course, storks bring all babies.”
-
“So you, too?”
-
“Yes, darling.”
-
“And grandma too?”
-
“Of course.”
-
Girl’s school report: “It appears nobody in my family had any intercourse in at least three generations.” Who doesn’t love waking up, looking at the person sleeping next to you and starting the day with a long, loving kiss? Apparently the airline had a different take on these things. A male and a female whale are swimming together through the ocean and the male is whining, “The entire world is trying to save our species. Environmentalist groups are doing their best. The Greenpeace is bending over backwards. But no, madam has to have a headache!!!” An elderly couple goes to their favorite restaurant they’ve been visiting together for decades. The man addresses his wife with all sorts of endearments, calling her his darling, sweetheart, his treasure etc.

When the lady excuses herself and goes to the bathroom, the waiter comments to the man, “Wow, you have an amazing relationship with your wife, all those lovely names you call her…”

The man looks at him, “To be honest, it has become a necessity. I actually forgot her name about 3 years ago.” Five Qualities of a Good Woman:

1. You should have a woman who works at home, who cooks, keeps things tidy and has a job.

2. You should have a woman who can make you smile and laugh.

3. You should have a woman you can trust, a woman who never lies to you.

4. You should have a woman who is good in bed and enjoys spending time with you.

5. And you should always, always keep these four women from ever meeting each other. A guy meets his friend and says, “Hey George! I heard you’ve been struck by lightning, what’s up with that? How are you?!”

George just shrugs, “Yeah, I can’t even remember. After ten years of marriage, you stop noticing these little things.” I read the mass chicken farms pump chickens full of antibiotics. Well, that would at least explain why chicken soup is so good when you have a cold. A man well into his seventies asks his wife: "Mary, doesn’t it make you sad when you see me running after those young girls sometimes?"
-
"Not in the least, Peter,” replies Mary, “our dog chases cars all the time and there’s also no chance he could manage to drive one!" Three men are riding on just one motorcycle. They pass a police patrol.

The policeman shouts after them: “Police! Stop your vehicle now!” But they just continue driving past.

The last man turns around and yells: „Sorry dude! We can’t take you on, we’re already one too many!” A passenger on an airplane sits next to a priest. Soon after the plane takes off, he accepts a glass of wine from the friendly stewardess, but the priest smiles apologetically at the stewardess’ offer and explains, “As a representative of the Catholic Church, I have to refuse the alcohol, just as I would refuse intercourse.”

His neighbor looks up from his glass and then at the stewardess, “I’m sorry – there was a choice?” Little Johnny drives with his uncle in his new Mercedes. He asks him, “Uncle Bob, what is that star at the front for?”
-
Uncle Bob chuckles patronizingly, “It helps me run over old people.” He prolongs the joke by swerving a hair’s width away from an old man on a bike and pretends to be angry he missed him.
-
Little Johnny says, “You know, uncle Bob, I think your star isn’t working properly. If I didn’t open the door in the last second, we would have totally missed him.” 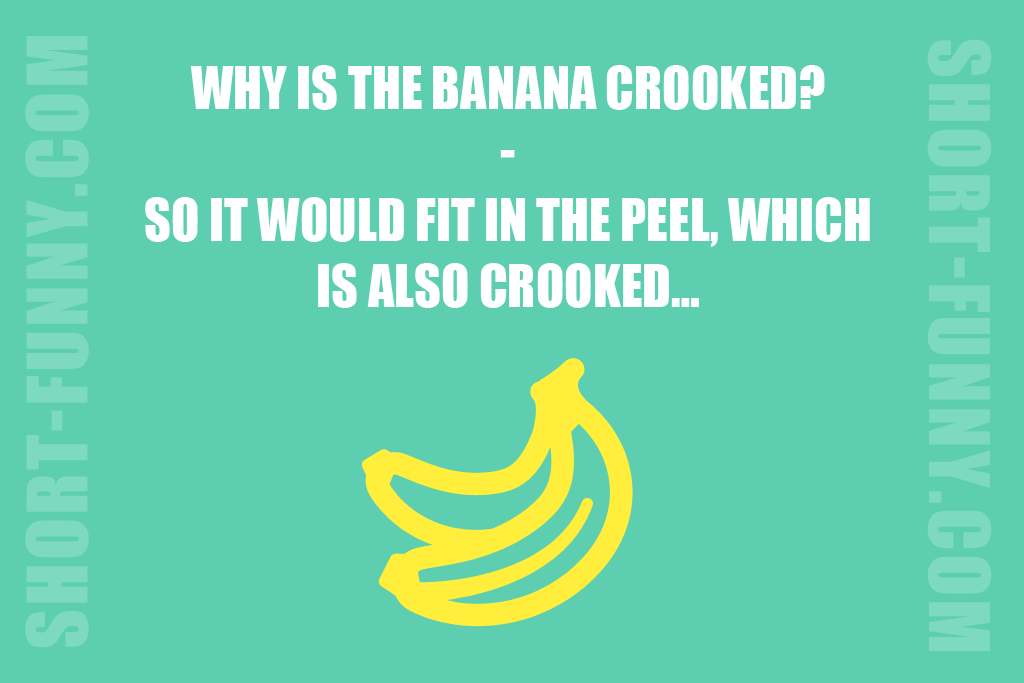 Why is the banana crooked?
-
So it would fit in the peel, which is also crooked… Next Part
Good jokes to tell anyone
Part 1 | Part 2 | Part 3