Seriously good jokes! Girl: "I'm sick and tired of you pretending to be some detective ace all the time. I think we should split up."
-
Me: "Excellent idea. That way we can cover more ground." ”Women really know how to hold a grudge.

My wife asked me to pass her a lip balm. And by mistake, I gave her a tube of Super Glue.

It’s been a month now and she’s still not speaking to me!


“Mom, the kids keep making fun of me, they keep laughing that my teeth are too big!”
-
“Oh Jamie, never mind them. And how many times do I have to ask you to try not to speak indoors, look, you’ve scratched the whole floor again!” Tonight I dreamt of a beautiful walk on a sandy beach.

At least that explains the footprints I found in the cat litter box this morning. Funny, those road signs: "Caution - Watch for children!" I mean, how dangerous can a child be?  My dog used to chase people on a bike a lot. It got so bad, finally I had to take his bike away. What do you get when you cross-breed a shark and a cow?

I have no idea but I wouldn’t try milking it.  Waiter? I’m sorry, but I cannot eat all this. Would you be so kind and pack it for me? To take away?
-
But sir, this is a buffet.
-
Pack it up I said!“ A man asks a farmer near a field, “Sorry sir, would you mind if I crossed your field instead of going around it? You see, I have to catch the 4:23 train.”

The farmer says, “Sure, go right ahead. And if my bull sees you, you’ll even catch the 4:11 one.” "I wasn't that drunk yesterday." "Oh boy you took the shower head in your arms and told it to stop crying." I just like to sleep without clothes on. The air-hostess could have been a bit more understanding. A man is looking at himself in the mirror and he likes what he sees, “Half an inch more and I’d be king.”

“Half an inch less and you’re a queen.” Two prison guards are changing shifts in the morning, “You know that prisoner 885 ran off in the night?”

The other guard sighs, “Ah finally. No more of that dang hammering.” Today, my son came to me and gave me a hug – out of the blue. I was very pleasantly surprised – that is, until I heard him tell his father, “You’re right. She did gain weight.” I proposed to my ex-wife. But she said no. She believes I’m just after my money. Of course I should clean my windows. But privacy is important too. Astronaut's last words: OMG guys, who farted? I have to open the window. I’ve always thought I will discover my inner self through some eastern philosophies, not because of a stupid single-ply toilet paper from Walmart! I saw a poster today, somebody was asking “Have you seen my cat?” So I called the number and said that I didn’t. - I like to help where I can. I made cookies for you. It is an apology because I crashed your car.
-
YOU DID WHAT?!
-
Cookies. I made cookies for you. At a mental hospital: “Doctor Fergusson, what do you want us to do with the new arrival in room 18? He thinks he’s a wolf.”
-
Doctor Fergusson thinks for a moment, “First rule is, don’t let his grandmother in for a visit!” Some nice Chinese couple gave me a very good camera down by the Washington Monument.

I didn’t really understand what they were saying, but it was very nice of them.


What gives us milk and has one horn?

A milk truck. I was picking up my girl. Her dad looked at me very sternly and said, "I want her home by midnight, young man!"
-
I said, "What do you mean? You already own her home!" I hate people who take drugs. DEA is the worst. The son asks his dad, “Dad, what can I do if I want to live forever?”
-
Dad replies, “All you have to do is marry.”
-
The son is surprised, “And that will really make me live forever?”
-
Daddy replies wearily, “No, but the wish dies.” My boss got really angry with me this morning. He kept shouting and cursing for at least an hour.

After a while my habits kicked in and at one point I said, “You’re right, honey.”  Sometimes it is very important if a sentence was said by a man or a woman. A good example: “I used a whole pack of tissues during that awesome movie yesterday!” Two elephants meet a totally naked guy. After a while one elephant says to the other: “I really don’t get how he can feed himself with that thing!” I just got a photo from a speeding camera through the mail. I sent it right back – way too expensive and really bad quality. What do electric cars and diarrhea have in common?
-
The idea, “I will make it home.” I’m dating this wonderful girl and she has a twin. People often ask me how I can tell them apart – but it’s easy, really. Jane likes to paint her fingernails and Tom has a willie. 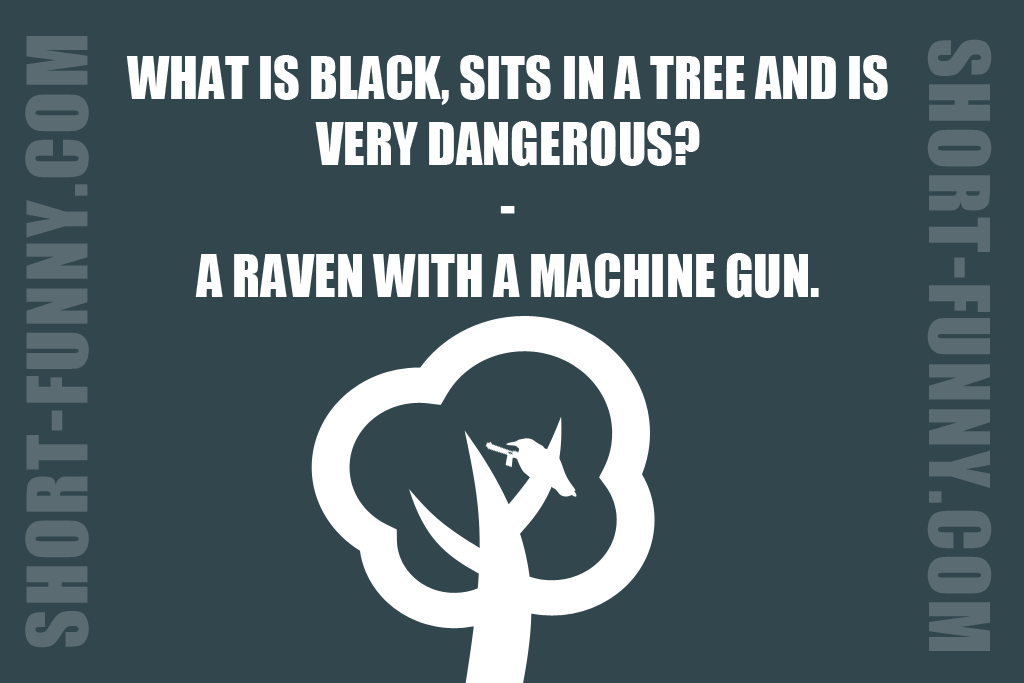 Husband brings the child home from kindergarten and asks his wife, "He’s been crying the whole way home. Isn’t he sick or something?"

"No," replies the wife, "he was just trying to tell you he isn’t our Frankie." I freaked out the electrician by opening the door naked. I couldn’t tell what gave him a bigger shock – whether the fact that I was naked, or that I got into his house. My friend Robbie shocked and hurt me today. He told me that I make people very uncomfortable and have no respect for personal space. I mean, what a thing to say to a friend? It totally ruined our bath! Girls mostly treat me like a God. They totally forget that I exist and only approach me when they need something. Peter confronts his friend at work, “Paul, did you yell at my wife, slap my kids about and kicked my cat when you came to pick up that folder yesterday?!”
-
Paul stammers, “But… but your wife said I should make myself at home!” That moment when your teacher gets very angry with you because you’ve been nervously clicking the ball pen, but you still have to click it one more time to be able to write. At a disco:

He: “Wow, what’s a cute girl like you doing in a corner all alone?”
-
She: “I had to fart.” Two police officers crash their car into a tree. After a moment of silence, one of them says, “Wow, that’s got to be the fastest we ever got to the accident site.” In a boomerang shop: "I'd like to buy a new boomerang please. Also, can you tell me how to throw the old one away?" Girls mostly treat me like a God. They totally forget that I exist and only approach me when they need something. Broccoli: Hey, I look like a tree.

Banana: Man, can we change the topic please? Next Part
Hilarious Jokes