The best first: I finally got the courage together and called the rape help hotline. But they were really nasty. I mean, they should say in the ad that it’s for victims only!
Our most popular categories:
Top 100 Funny Jokes New Jokes Hilarious Jokes Clean Jokes Funny Sayings Black Humor One-Liners Funny Riddles Dad Jokes Best Puns Fun Facts Kids Jokes More Awesome Jokes

by Katerina Janik
A guy asked at a skydiving school, "If the chute doesn't open and the reserve doesn't open either, how long until we hit the ground?"

The instructor looked at him and said, "The rest of your life."


But mum, I don't want to go to America.

- Hush child and keep swimming. Q: Why did the one-armed man cross the road?

A: To get to the second hand shop. Why have trips to England become so popular with Siamese twins?

It gives the other one a chance to drive a car, too. Two Arabs sit in the Gaza Strip, enjoying a quiet pint of goat milk. One takes out his wallet and starts flipping through the pictures.
-
"This is my oldest son. He's a martyr. This here is my second son. He's also a martyr!"
-
The second Arab nods, “They blow up so fast, don't they?" Two cannibals are chewing a clown. One says to the other: "Hey, does it taste kinda funny to you?"


A man visits a doctor for a checkup. When it’s over, the doctor tells him he has bad news. "You have only six months to live."

The man digests it for a while and then says, "There's just one thing I can do, I have to become a Communist."

Surprised, the doctor asks, "But you've been a patriotic American all your life, why would you become a Communist now?"

The man says, "Better when one of them dies than one of us!" 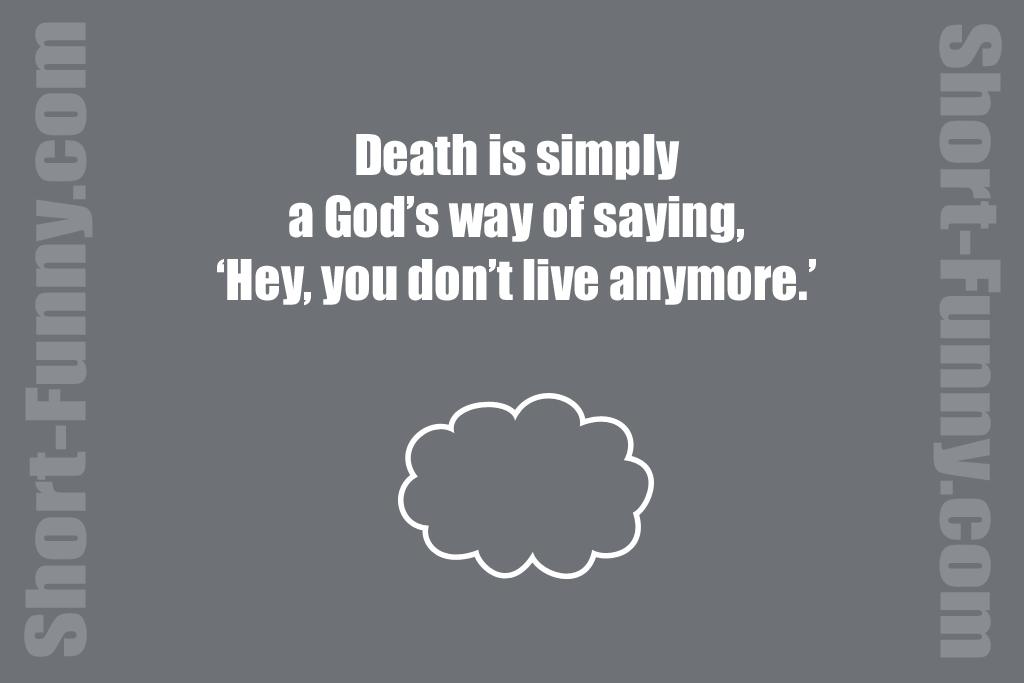 Death is simply a God’s way of saying, ‘Hey, you don’t live anymore.' What is the first thing they teach French soldiers in their basic military training?

How to surrender in five languages.
A Chinese boy pleads with his Grandpa, “Granddad, can I have a dog? Please???!!!“
-
Two hours later says Grandpa, “Enjoy your meal, my boy.” I broke up with my Japanese girlfriend today. I had to drop the bomb two or three times before she finally got it. Man is asked at the hospital:

How tall are you?

I’m very sorry, but I’m not the doctor. I’m the carpenter.Two turkeys are looking at the sky at dusk and one asks the other: „Do you believe in life after Christmas?“ Next Part
Best Black Humor Jokes