Q: What happened to the pirate when his wooden leg caught fire?

A: He got burnt to the ground.
What subject are pirates best at at school?
-
Arrrrt.Little Johnny meets a pirate with a wooden leg, a hook, and an eye patch. The boy asks, “Wow Mr. Pirate, what’s the story with your leg, sir?”

The pirate answers: “A shark bit it off.”


Johnny replies, “Cool… and what happened with your hand?” The pirate answers, “Another pirate chopped it off in a sword fight.”

The boys is overawed and keeps on, “And what happened to your eye?!” The pirate replies, “Um, a seagull pooped on it.”

The boy is astonished, “Oh boy, you can lose an eye from that?!” The pirate shrugs, “Not normally, but I’ve only had the hook for about a day when that happened.” How did the pirate become a boxing champion so fast?
-
Nobody was ready to take on his right hook.
What do you call a pirate with two eyes, two hands and two legs?
-
A beginner.What does the pirate say when he steps on a Lego?
-
Arrrrrgh!!!
It always struck me as odd that the Pirates of the Caribbean DVD had a piracy warning… 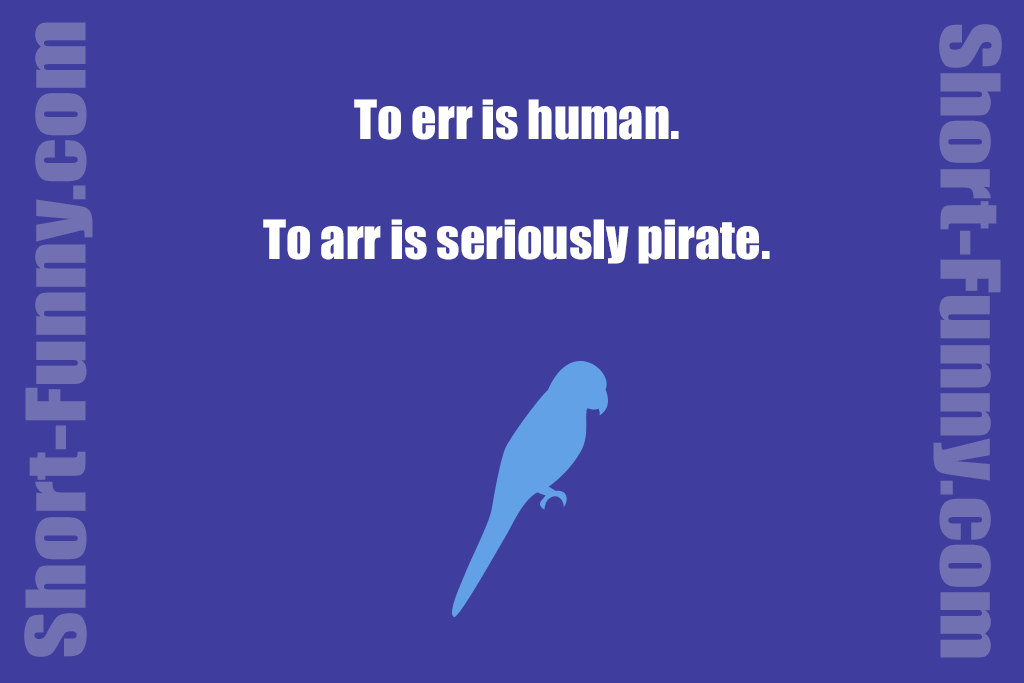 To err is human.

To arr is seriously pirate.  Why are pirates such eager readers of the Playboy?
-
Because of the arrrticles.

Oh no, sir, I said pirate ship. What on Earth would possess me to call you a pile of shit?!
How do pirates communicate with each other?
-
With an Aye phone.
What were the pirate’s words when he blew out the candles on his 80th birthday cake?

Answer: Aye matey!What is regularly given to the sea around 8 am, if the digestion is right?
-
The captain’s log.
How do pirates know that they are pirates?
-
They think so, therefore they arrr.
What is a pirate’s favorite movie?
-
Booty and the Beast. (But it is arr-rated.)
Why don’t the Chinese make very good pirates?
-
Because they’re not very strong in the ‘Arrrr!’ department.
How did Captain Hook died?
-
Multiple stabbings. He got a bad case of an itchy rash.
What do you get when you cross a parrot and a shark?
-
A bird that will talk your head off.
How did Capitan Hook die?
-
He got distracted and wiped his butt with the wrong hand. In case his ship is sunk, every pirate carries a bar of soap with him at all times.
-
You know, to wash him ashore.
Who was the first pirate?
-
Noah, the builder of the Arrrrk.
Steve: I know a pirate with a wooden leg called Joe.

Pete: Really? I wonder what he called his hook.
What’s the difference between a pirate and a strawberry farmer?

The pirate buries his treasure, the farmer treasures his berries.
How do you greet a Spanish pirate guy with a rubber toe?
-
Hola Ruberto! Why did the pirate cross the road?

To reach the second hand shop.
What is pirates’ favorite choice of music?
-
aRR n’ B Why are pirates bad at cards?
-
It’s kind of hard to play when you’re sitting on the deck. How does a pirate get to the top of the building?
-
By elevataaaaarrrrrr!!!!!
Pirate pick up lines:

- Is that a wooden leg or are you that happy to see me?

- Do you mind if I drop anchor in your lagoon?

- Care to do some booty plundering with me?

- Surrender your booty!  What kind of a ship is most feared by pirates?
-
The Steady Relationship.

How does a pirate declutter his ship?
-
By having a yarrrrd sale. Why don’t you usually see a pirate that is a smoker?
-
Because they use the patch.
A pirate has stopped his pirating and mended his ways, but his parrot was just too bad, constantly swearing and refusing to behave.

Finally the ex-pirate had enough of it.

When the parrot started swearing again, he stuck it in the freezer for five minutes.

When he fished it out again, the bird was very humble and said: “I promise I’ll be good now, John, no swearing! Just a question – what on Earth did the turkey do?”
Why don’t pirate marriages last much?
-
Because of all the arrrrguments.
Wooden pegs and hooks are really expensive these days.
-
They cost an arm and a leg.
What is a pirate’s favorite letter?

P. because it would be an R, but it’s missing a leg.How can you tell a pirate has fallen for modern technology?
-
It’s the iPatch that gives it away.

Why do pirates make great lawyers?

Because they have very good arrrrguments.Why is it so hard for pirates to learn to read?
-
Because they spend months and months at C.