The best first: Mother, “English teacher asks class: “Which tense is the sentence ‘I AM BEAUTIFUL’?” 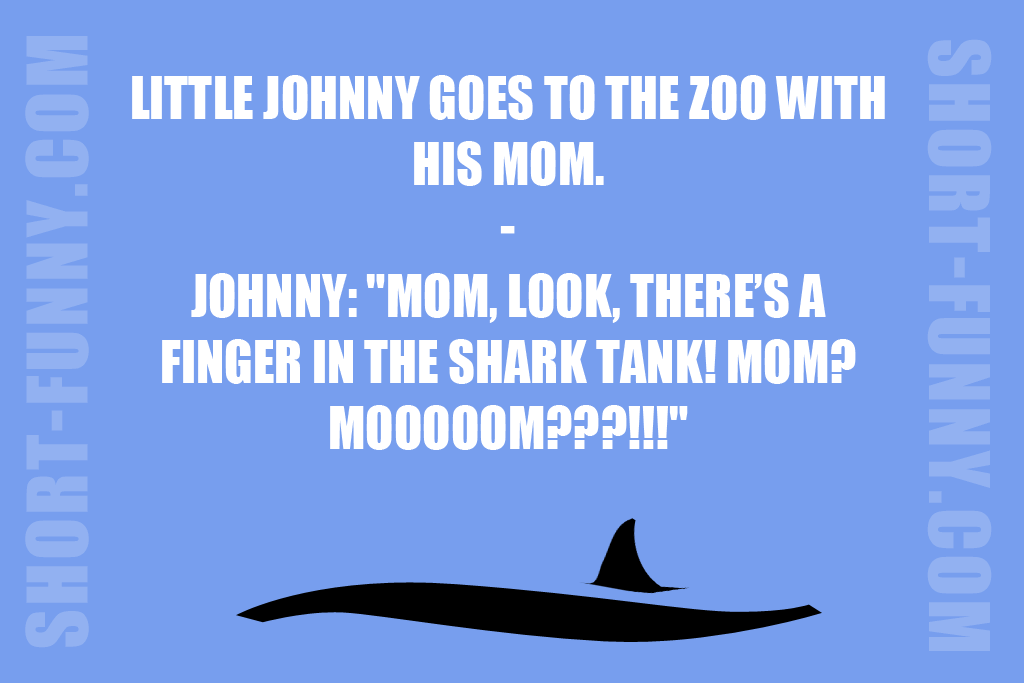 
The class is having a guessing game and the teacher asks, “OK, what do you call someone who keeps on talking even though nobody else is interested anymore?”

"I borrowed it to my friend. He wanted to freak out his parents." Little Johnny to his mom: “I shot 4 goals at the soccer match today!”

Little Johnny: “Not really, we played 2:2.” Little Johnny plays “shoot the apple from the head” with his friends. The first shot lands directly in his eye. “Ooowww man, you got me right in the eye!” he complains to his friend.

But the other friend also wants a go and persuades Johnny that he is a much better shot. But bingo, the second shot gets Johnny in the other eye.

Johnny gives up: “Well I’ve had it with this game, I’m going home. Mom said I should come back once it gets dark anyway.” Little Johnny was late for school. The teacher asked him why, and Little Johnny explained it was because he met a man who had lost his wallet on the street.

“Ah,” nodded the teacher, “you were helping him find it!”

“Um, not really,” said Johnny, “but I had to keep standing on it until he would give up and go away.” Teacher asks, “Who can tell me the chemical formula for water?”

The teacher is puzzled, “What on Earth are you talking about, Johnny?”

Little Johnny looks hurt, “But sir, you yourself said yesterday that it's H to O!”


History teacher asks Little Johnny: Where was the French – English peace treaty from 1800 signed?
-
Little Johnny: “Bottom right corner.” The class was told to paint a picture of cows grazing in a meadow.
-
Soon, Little Johnny lifts a hand that he’s finished and shows the teacher a blank sheet of paper.
-
“But Johnny, you didn’t paint anything on it?” says the teacher.
-
“Well, the cows have eaten all the grass and since there was no grass left, they just went away.”  Teacher tests Little Johnny, “OK, Johnny, create a sentence which starts with ‘I’.”

Little Johnny confidently starts, “I is...”

Teacher snaps, “No, Little Johnny. You must always say, ‘I am’.”

Little Johnny sighs, “Yes ma’am. ‘I am the ninth letter of the alphabet.’" Little Johnny peeks through the keyhole of his parents’ bedroom one night. He stares for a minute and then, thoroughly disgusted, shakes his head, “And these people tell me I shouldn’t pick my nose?!”