The best first: I was breastfed till 2.

But enough me talking about how my day was, what did you do?

by Katerina Janik
You stole my Microsoft Office and for that you’re going to pay.
-
You have my Word!

Who am I to argue? So I thanked him and went back home. 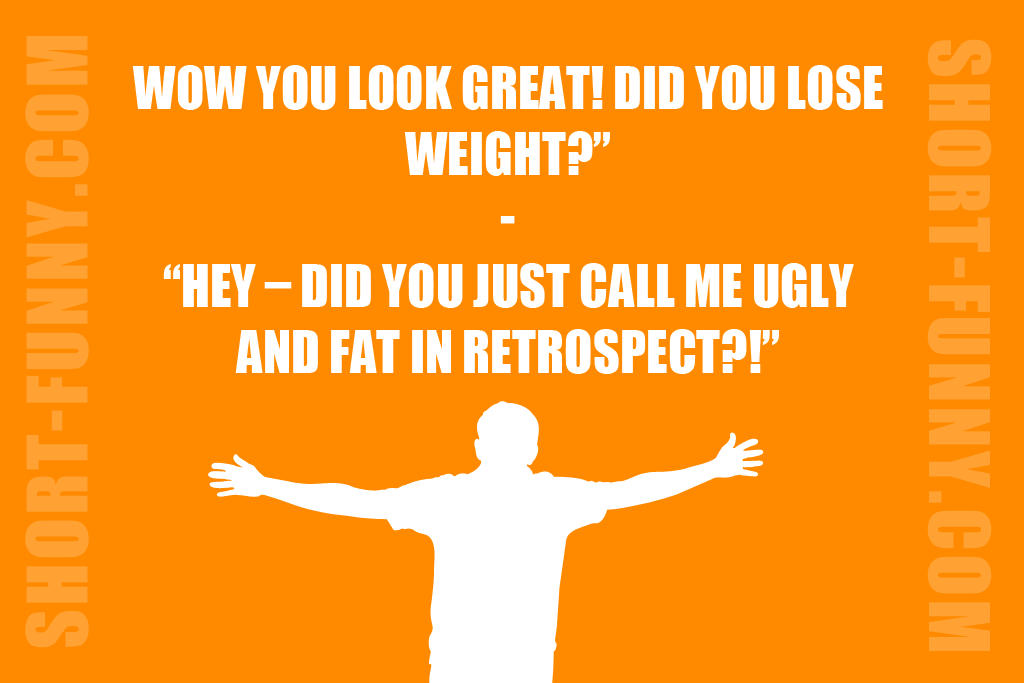 Not every badly unkempt guy is homeless. It could well be that he lives with 3 females and only 1 bathroom. A German, an American and a Russian walk into a bar.

The bartender looks at them suspiciously and says, “Is this some kind of a joke?” “Mommy, I saw you jumping on daddy’s belly yesterday night.”

“Yes, we were trying to get rid of daddy’s big belly. I jump on him so all the air would come out.”
-
“Aha, I know why it isn’t working then – the woman from next door comes every afternoon when you go shopping and blows all the air back into him again.”


I broke my personal record for a 100 meter dash: I’m on 64 meters. Sleep with an open window tonight!

One mosquito invited for the event. 2800 mosquitos will be attending the event. In Spain, there is a tradition after a bullfight to serve the mayor the bull’s testicles.
-
One day after a bullfight, the mayor asks the waiter: “Funny, why are they so small today?”
-
The waiter: “Today, sir, the bull won.” Why do women live on average two years longer?
-
Because the time they spend parking doesn’t count. What does a crocodile say when it eats a clown? "Tastes funny somehow!" Why did the physics teacher break up with the biology teacher? There was no chemistry. Little Johnny asks his father:
"Where does the wind come from?"
-
"I don't know."
-
"Why do dogs bark?"
-
"I don't know."
-
"Why is the earth round?"
-
"I don't know."
-
"Does it disturb you that I ask so much?"
-
"No son. Please ask. Otherwise you will never learn anything." They threw me out of the cinema today for bringing my own food. But come on – the prices are way too high, plus I haven’t had a barbecue in months.   I‘ve decided to run a marathon for charity. I didn’t want to do it at first, but apparently it’s for blind and disabled kids so I think I’ve got a good chance of winning. A man at a party: Hi, do you want to dance?
-
Woman: Yeah, sure!
-
Man: Great, go and dance, I want to talk to your pretty friend! More jokes
Hilarious Jokes