The best first: What is the ultimate proof that the Earth is not flat?
-
If it were, cats would already have pushed every little thing off its surface.
Our most popular categories:
Top 100 Funny Jokes New Jokes Hilarious Jokes Clean Jokes Funny Sayings Black Humor One-Liners Funny Riddles Dad Jokes Best Puns Fun Facts Kids Jokes More Awesome Jokes

“What happened to your cat? He was running around the whole village like the devil was on his tail.”
-
“Well he got castrated yesterday and now he’s canceling all his dates.”


A man drives deep into the forest to get rid of his cat. He lets her out at an abandoned place. After one hour he gets a phone call from his wife: “The cat is back.”
The man growls: “Ok, can you put her on, I got lost and need directions.” Two neighbors meet:
"Your cat killed my Pitbull."
-
"No way, that is impossible."
-
"Yes, he choked on her." What is the difference between a man and a cat?
-
One eats a lot, is lazy and doesn’t care who brings the food. The other is a pet. Emergency call at the police station:

"Please come quick. It’s a life and death situation. Our dog has become very aggressive. He might do something to me."
-
"Who is there?"
-
"The cat." Bob to Joe, "What the heck, Joe, I’ve just heard your dog meowing. How come?!"
-
"Ah yeah, that’s OK! He is just learning a second language." How did the cat get the first prize at a bird show?

Somebody didn’t shut the champion’s cage properly. Two cats are sitting in front of bird’s cage and observe a newly arrived green canary.

One cat says to the other, “It really is a strange color for a bird. Maybe he’s not ripe yet.” 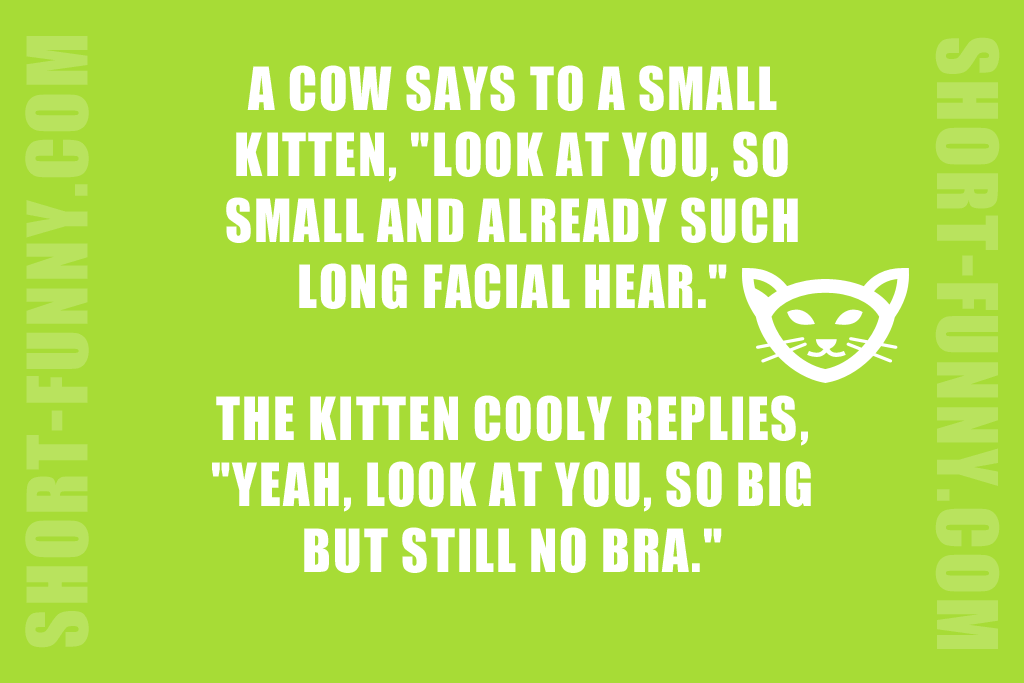 A cow says to a small kitten, "Look at you, so small and already such long facial hear."

The kitten cooly replies, "Yeah, look at you, so big but still no bra."  A woman sits in a diner. A cat comes in, buys a chocolate ice cream and leaves.

The woman is totally astonished, “Wow – that was unusual”.

The diner manager agrees, “That’s right. She’s never asked for anything else but strawberry before.” A woman gets a hysterical phone call, “Your cat ate my canary!!!”
Woman, “Thank you for telling me. I don’t have to feed her today then, right?” A cat meets a fox in the forest.

The fox asks the cat why she smells so dreadful.

The cat replies, “I was walking by a pooping bear and he asked me if my fur makes fuzz. I said no. So he wiped his butt with me.”

The fox wonders: “So how come you’re still in such a good mood?”

“Well” the cat replies, “When he was done with me, he asked the hedgehog.” A Chinese student is looking for an inexpensive room to rent. He finds one, but the owner warns him, “Yes, you can have the room. But we have a dog and two cats. I hope you like them.”
“No problem,” beams the student, “I’m happy to eat anything!” “Our cat was stupid enough to drink some gasoline yesterday. She spent two hours racing through the flat, then just flopped on her back and was totally still. “
“Oh no, is she dead?”
“No, just ran out of gas” What is a cat’s favorite car?

“A Catillac” In the middle of the desert one cat says to the other,

“I can’t. There is no litter box.” Two gangsters are about to break out of prison. The first one jumps off a wall into a trash container.

The guard shouts, "Who’s there?"

Then the second gangster jumps.

The guard gets suspicious, "Hello, anybody there?"


“My wife loves cats. But she’s got 40 of them and they cause a gruesome smell in our flat.”
-
“I guess you should air more often to battle that.”
-
“No can do, if we opened the windows, my 150 pigeons would fly away” More cat jokes:

Why is it a bad idea to play poker with a jungle cat?

Chances are it is a cheetah. What is the one place your cat can sit in, but you can’t?

Your lap. How many cats can squeeze into a regular sized empty box?

Just one. After that the box isn’t empty anymore. If TVs run on electricity and trucks run on gas, what do cats run on?

Their four paws. I had to get rid of the boyfriend.

My cat got allergic to him. When you arrive home after work, your dog will be extremely happy to see you and will lick your face.

The cat will still be mad at you for leaving in the first place. Q: What did the cat say when she was told the canary is off limits?

A: You’ve gotta be kitten me. Q: Why is it so rare to see a cat doing online shopping?

A: Because they prefer the cat-alogue. Q: What do you call a cat who gets her way no matter what?

A: Purrsuasive. Q: What does a cat say when somebody steps on its tail?

A: Me-ow! Q: Have you heard about the cat who climbed the Himalayas?

A: She was a renowned sher-paw.